According to Megan Krigbaum of Food & Wine Magazine, “Winemakers have always cared intensely about terroir: the idea that wine has unique qualities depending on where the grapes are grown—the soil, climate, altitude and so on. In America, we’re now becoming more and more knowledgeable about our own terroir, as evidenced by the push to establish more (American Viticultural Areas).” She is not wrong. Washington currently has 19 AVAs stretching across the state with more coming to life constantly as we grow to understand our amazing geology and climate more fully.

Palouse Winery sources our grapes from three AVAs. Our classically built Riesling heralds from the south-facing slopes over the Columbia River in the Columbia Valley AVA – the vines at White Bluffs Vineyard are over thirty years old! Our lush and unique Viognier is sourced from Crawford Vineyard, just south of Prosser in the rolling Horse Heaven Hills. Every single one of the diverse reds in our collection are sourced from Rattlesnake Hills, high on the wind-swept ridge above the Yakima River.

The east-west trending Rattlesnake Hills are an anticline of the Yakima fold belt, a series of geologic folds that define a number of viticultural regions in the area. The appellation itself lies on the south slope of the Rattlesnake Hills and includes the highest point in the Yakima Valley AVA. This heightened elevation lessens the risk of spring and fall frosts. Additionally, winter temperatures are warmer than the surrounding area, limiting the danger of hard freezes.

The predominant soil types are loam and silt-loam. A rocky caliche layer adds mineral elements to the region’s resulting wines, as roots grow around compressed limestone and clay. The vineyards at higher elevations are above the levels of the Missoula Flood, a series of cataclysmic events that define much of the Columbia Valley growing region. A sub-appellation of the Yakima Valley, Rattlesnake Hills has an arid, continental climate and receives an average of 6 to 12 inches of rainfall annually.

While majoring in philosophy at the University of Washington, Paul Portteus took an extended tour of Europe by Norton motorcycle, discovering the continent’s many wine regions and enjoying amazingly affordable vintages. It was from those early beginnings and an extended visit in the Sonoma Valley that he and his wife, Marilyn, launched Portteus Vineyards & Winery in 1981. Theirs was the 13th winery to be bonded in the state of Washington.

Among his other accomplishments, Paul championed for the designation of the Rattlesnake Hills American Viticultural Area, which obtained the official federal AVA title in early 2006.

Dineen is located in a unique hill-top area that is especially well suited for growing premium wine grapes, as well as offering far-reaching views of the valley below and Mounts Adams and Rainier in the distance. Dineen Vineyards began planting in the spring of 2001 and continues to add annually to the planted acreage. Currently there are 75 acres under vine. Our neighbors include the well recognized vineyards of Andrew Will, Sheridan, and Two Mountain.

Two Blondes is a 30 acre vineyard located in Zillah, WA just outside of Yakima. Planted in 2000, the vineyard is owned and operated by fellow islander Chris Camarda and business partner Bill Fleckenstein. It’s located in the Yakima Valley AVA.

Two Blondes is the coolest of the four vineyards we work with. There are two weather stations on site – an upper station at 1000 ft and a lower station at 650 feet. The instruments record daily temperatures that are used to graph the heat units of the growing season. Each year, we see that our season is short, but temperatures warm quickly in spring, allowing vine development to catch up with other growing regions.

The soils are a complex mix of Harwood – Burke – Wiehl series. They are silty loams formed in a silty loess eolian mantle over a lime-silica-cemented durpan. The vines are trained on bi-lateral cordons and the rows for optimal exposure.

“I believe that an individual piece of property can form a signature – an identity – and it is that face that is the focus of my winemaking. We are trying to let the vineyards reveal themselves. I believe that if Washington is ever to be considered a great wine region we need to establish the characteristics of our geographical areas and the characteristics of each vineyard in those areas.” ~ Chris Camarda

Variety typicity and pure fruit aromas and flavors are the hallmarks of wine from the Columbia Valley. In terms of Riesling, cooler sites tend to produce aromas and flavors of lime, lemon, and green apple. In warmer regions this turns to stone fruit, particularly peach.
The relationship to the Missoula Floods, a series of cataclysmic events, defines the soil types of the vineyards in Washington. Most vineyards lie below the floodwaters with soils of loess—wind blown deposits of sand and silt—overlying gravel and slackwater sediment with basalt forming the bedrock. This provides a diversity of soil types that are well drained and ideal for viticulture.

The irrigation required to grow wine grapes, along with consistently warm, dry temperatures during the growing season, provides growers with a large amount of control over grape development compared to many other regions of the world. This leads to minimal vintage variation and consistently high-quality wines.

Owned and run by Bob and Christa Whitelatch, the vineyard was originally owned by Christa’s parents, Audrienne and Russell Claar, who developed the first farm in 1950 and planted the first grapes in 1980. Since then the family has developed over 120 acres of premium vines.

The vineyards are on south and southwest facing hillsides above the Columbia River. This distinct microclimate located within the White Bluffs receives more heat than growing areas to the west and avoids the more frequent frosts and killer freezes to the east. The southern facing hillsides allow cold air to drain in the spring and collect more heat during the growing season. Sandy, rocky soil is especially conducive to growing quality grapes, and researchers have frequently stated that this region is one of the best in the state of Washington. Palouse’s Cloud Nine Riesling from White Bluffs continues to be a signature wine.

The Horse Heaven Hills appellation is located in south-central Washington along the Washington-Oregon border. The area takes its name from an early pioneer who said, upon seeing the region and its wide prairies and expanses, ‘‘Surely this is Horse Heaven!”

The area is among Washington’s warmer growing regions, allowing a wide variety of grapes to ripen successfully. Many vineyards in the Horse Heaven Hills are planted on south-facing slopes, providing for extended sun exposure.

There are three main soil types in the area—wind-blown sand and loess, Missoula Flood sediment, and hill slope rubble from the Columbia River basalt bedrock. Each of these provides well-drained soils suitable for wine.

Like many of eastern Washington’s growing regions, the Horse Heaven Hills are an anticline of the Yakima fold belt. Pressure differentials cause significant winds in the Horse Heaven Hills. These winds reduce canopy size and toughen grape skins, as well as protect against mold and rot. The nearby Columbia River also has a moderating effect on temperatures, reducing the risk of early and late season frosts, which can be a problem in nearby areas.

Third generation farmer Connie Crawford meticulously tends the 80 acres of 17 year old vines sitting just outside of Prosser, WA. Her passion for cultivation and the knowledge of the land she brings to her work make her an excellent partner for Palouse. She gifts us with our gorgeous Viognier grapes every year.

Crawford Vineyard believes in training the vines to grow in a double trellis manner, attempting to improve grape quality by reducing shade within a dense canopy and dividing the mass of foliage into two. The canopy has greater access to light and wind movement and just seem a lot happier, greatly impacting the fruit and yield. Happy fruit translates to happy wine.

Loam is a type of soil composed of sand, silt, and clay. More important than the composition is the fact that loam is what gives Crawford Vineyard grapes that extra zest. Chockablock with nutrients and the perfect composition for drainage, grapes florish in this good dirt. 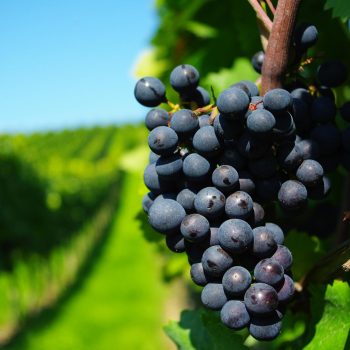